Marijuana: How it can affect your disability case.

How does smoking marijuana (A.K.A. weed, pot, cannabis, reefer, etc.) affect the strength of your claim for Social Security disability benefits? While there is currently no drug testing policy for Social Security disability (SSD) benefits, the answer to how marijuana can affect your SSD claim is complicated. It depends on your individual circumstances and the state in which you live. Is the marijuana prescribed by your doctor? Are you using the weed recreationally in a state where marijuana is legalized? Or are you using marijuana that is not prescribed by your doctor in a state where its consumption is illegal? No matter what your answer, whoever is reviewing your case will likely have a bias against you.

The Social Security disability system is based on a structure of reviews performed by case managers, doctors, and administrative law judges. There is no black and white picture of who qualifies for disability benefits and who does not. There is no exact box into which disability beneficiaries fit perfectly. This is because everyone is unique. Disability is largely subjective, based upon the individual applicant’s impairments and functioning. The process focuses on each person and how their impairments impact their functional capacity, not only in the workplace but also in their home life.

I’ve seen clients diagnosed with schizophrenia who are able to function reasonably well with medications, holding down a full-time job, and maintaining a social life. Other clients diagnosed with the same condition, taking the same medications are unable to function outside of a highly structured living environment. Every individual reacts differently to certain impairments. Thus, Social Security employees are forced to review cases based not only on the diagnosed impairments but also on the resultant symptoms and limitations for that specific individual. Because of this, an individual’s credibility and truthfulness are given significant weight when making a determination.

Our society generally views the consumption of drugs and alcohol in a negative light. A commonly held viewpoint is that if you are applying for disability benefits while using drugs or alcohol, you are seeking a means to support your habit without actually working. For many of my clients this “drug bias” could not be further from the truth. However, it is an unfortunate hurdle that as a legal representative I need to overcome. 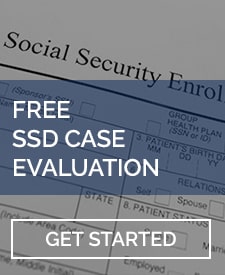 In pursuing Social Security disability benefits for a client, I obtain the treating physician’s prescription so as to document the legitimacy of the marijuana use. I then request from the physician a written narrative statement explaining why its use is necessary for treatment. Having a doctor’s prescription for medicinal marijuana is the best scenario in terms of a weed user’s chances of obtaining Social Security disability benefits. It not only bolsters your credibility but also supports the side effects from treatment which might affect your employability.

Throughout the course of my practice, it has been relatively uncommon for treating doctors to prescribe medical marijuana. I sometimes find marijuana prescribed in cancer cases where the individual is undergoing chemotherapy. Occasionally, if the individual is living with a progressive disease, there might be a prescription for marijuana to alleviate severe pain.

Twenty-three states and the District of Columbia have enacted medical marijuana laws. Recently, Florida voters rejected a proposed amendment to the Florida Constitution which would have allowed limited use of medical marijuana.

Currently, only three states have legalized the use of recreational marijuana: Washington, Colorado and Oregon. Even in those few states where the drug is legal, when applying for Social Security disability benefits, its use still holds the same negative bias. Without a doctor’s note, the use of marijuana is generally perceived as contributing to the severity of an individual’s physical condition or mental condition like anxiety. So even though the drug may be legalized, its use still poses a significant hurdle to overcome in convincing the Social Security employee of the severity of the conditions.

Illegal Use of Marijuana

If you reside in a state where the consumption of marijuana is illegal you will generally have an even stronger negative bias against its use. Your credibility and truthfulness can be placed into question by your consumption of an illegal drug.  Social Security employees often consider the illegal use of drugs as a way to give little or no credibility to your explanations regarding how your diagnosed conditions affect you. You also will need to show that your use is not a contributing factor to the severity of your condition.

Whether marijuana is legal or illegal, prescribed or not prescribed, its use will certainly pose a barrier to proving your disability. That’s why an experienced attorney is invaluable in obtaining a favorable disability ruling.

In most cases, I find my clients are smoking weed as a way to self-medicate, whether it’s to relieve pain or treat anxiety. In these situations, the hurdle is to show the marijuana use is not causing or exacerbating the health conditions.  The argument needs to be articulated that the use of weed is immaterial to the initial condition and resulting symptoms and limitations. Its use is only an attempt to treat and control the severity of the symptoms.

Additionally, if you are smoking non-prescribed weed, the question arises as to how you can afford the drug. When individuals apply for disability they are asserting to Social Security that they are unable to work or are minimally working due to the severity of their medical conditions. If you aren’t working then where are you getting the money to purchase the weed? Weed is expensive! Without an explanation as to how you are able to afford to purchase weed, Social Security will assume you are working under the table and not reporting earnings.

I have outlined just a few of the problems created by the use of weed when applying for SSD. It is best to keep in mind the people who are reviewing your case are only human beings with biases and prejudices that they bring to the decision-making process.

There is no definitive standard, spelled out in black and white, as to exactly which individual meets the requirements for disability. Social Security employees must use objective medical records as the basis of their decision, but there is also a lot of wiggle room for their own subjective opinions to affect the ultimate decision.

If you are smoking weed, whether it is legal or not, you should retain an experienced attorney to help with your case. You will be facing a negative bias from the outset and without an attorney to help overcome these hurdles you are setting yourself up for a possible negative outcome.

On a final note, a very important warning—Don’t even think about not disclosing your drug use to Social Security. That is even worse than actually using drugs. Social Security will inevitably find out about drug use through your medical records and when they do, your credibility is forever compromised.