On March 29, 2021, a 15-year-old driver in Tallahassee, Florida lost control of his car on a dark, narrow road, and crashed into a tree. The high-speed crash caused minor injuries for him but killed both passengers – who were also teenagers. Officials reported that the driver’s lack of experience, speed, and roadway conditions all contributed to the crash.

Teenage drivers are more at risk of getting into a car crash than any other age group, and Florida teens are no exception. Several factors contribute to this, including their lack of driving experience, tendency to multitask, and misperceived sense of invincibility. At LaBovick Law Group, we take teenage driver safety very seriously. Brian LaBovick often works with schools, educating teenagers on driving responsibly and avoiding potential crashes. With teenagers returning to school and increasing their time on the road, our firm worked with data visualization agency, 1Point21 Interactive to analyze all crashes involving one or more Florida teenage drivers from 2012-2019. We identified the most common areas of concern for teens in Palm Beach County – where our office is located – and also across Florida.

During our study period, there were a total of 2,698,393 crashes in Florida; 12 percent – or 325,628 of the crashes – involved a teenage driver. Because the data from the Florida Department of Transportation does not indicate if the teenage driver caused the crash – only that the crash involved at least one driver in the age range of 14-17.

This map is interactive.  Each point represents the location of a motor vehicle crash involving a teenager.  Click and drag to change the focus of the map location.  Zoom in using the mouse wheel or touch gestures and hover each point to reveal more information about the collision.   For best experience, rotate mobile devices.

Are Teens Involved in Crashes More Often Than Adults?

Which Counties Have the Highest Teen Crash Rates?

Alachua, Leon, and Duval – North Florida counties with largely populated cities – have the top three highest rates of teen-related crashes, while Lafayette, St. Johns, and Hendry have the lowest rates. Lafayette County is both the “safest” for teen drivers and the second least populated in Florida. 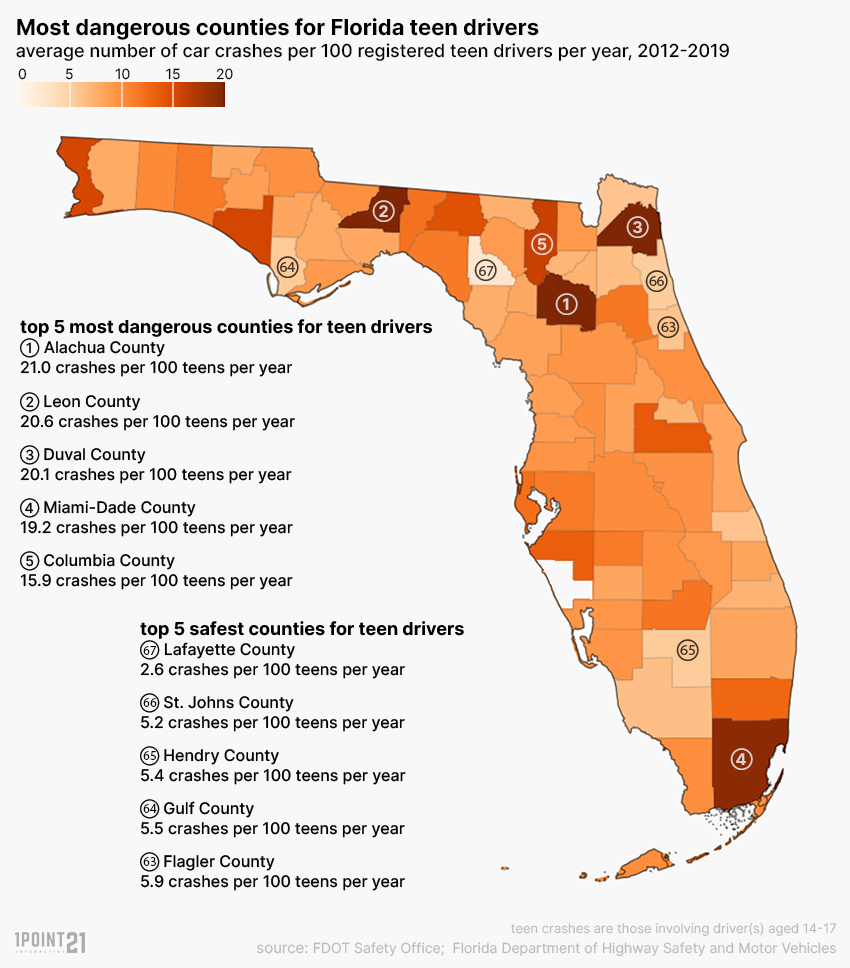 The 25 Counties With the Highest Teen Crash Rates:

The 25 Counties With the Lowest Teen Crash Rates:

Where Do Crashes Take Place?

All drivers – teenagers or adults – are more likely to get into a crash in an urban or suburban setting. Teens are slightly more likely than adults to be involved in a crash in a non-city area (suburbs, town, rural).

There is an equal likelihood of teen-related crashes and adult-only crashes near schools. Across Florida, teen crashes are surprisingly not more likely to occur near high schools, theaters, and malls. Palm Beach County is an exception, though: There are more crashes involving teen drivers than only adult drivers within 0.25 miles of high schools and malls. 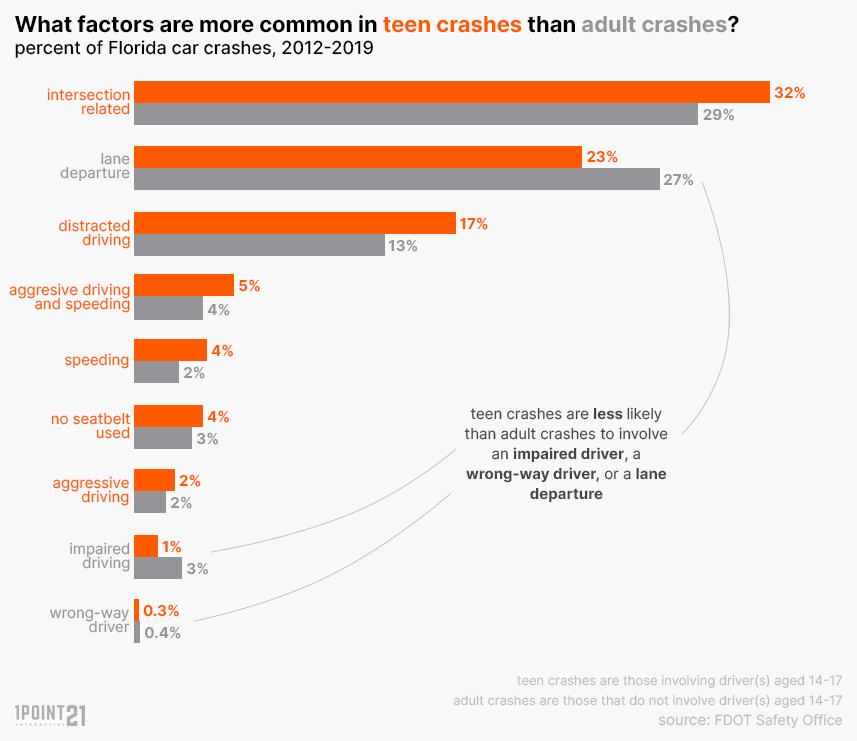 When Do Teen Crashes Occur? 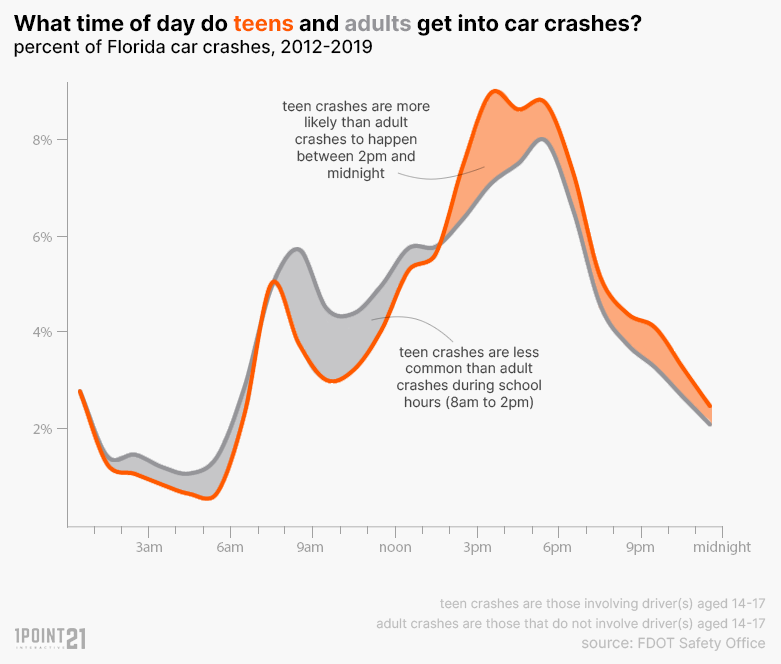 How Serious Are Teen-Related Crashes?

Teen-related crashes are more likely than adult-only crashes to cause an injury to one of the parties, but a large percentage are not serious injuries.

What Are the Riskiest Intersections for Teens in Florida?

We created a collision risk index (CRI) that weighs the number of collisions and assigns more weight to severe injuries. By this criterion, State Highway 70 and 14th Street West in Bayshore Gardens is the riskiest intersection in Florida, with a CRI score of 70. From 2012-2019, this intersection saw more teen crashes involving serious injuries than any other intersection. There were 5 teen crashes ending in serious injury, one fatal teen crash, and one teen crash involving a minor injury.

What Are the Riskiest Intersections for Teens in Palm Beach County?

Which High Schools in Palm Beach County Have the Most Crashes Nearby?

For more context, we looked at how many teen driver crashes were near each Palm Beach County high school. Boca Raton Community High School is above all the rest, but it is also near two freeways.

Because teen drivers are significantly more likely to be involved in a car crash than any other age group, it is important to practice the following safety tips:

LaBovick Law Group is deeply committed to The Safety 4 Life Foundation, which creates impactful educational programs designed to change dangerous behavior on and off the road. Our inspirational experiences act as a guide for children and families to make positive choices that save lives.

Methodology and Fair Use

This study is based on 2012-2019 crash data from the Florida Department of Transportation (FDOT) Safety Office. The data does not specify which driver in the crash was the teenager or who was at fault for causing the crash – only that the crash involved a driver in the age range of 14-17.

If you would like to report or republish our findings, please link to this page to provide a citation for our work.